Check out our Page!

When Do You Need A New Deck? 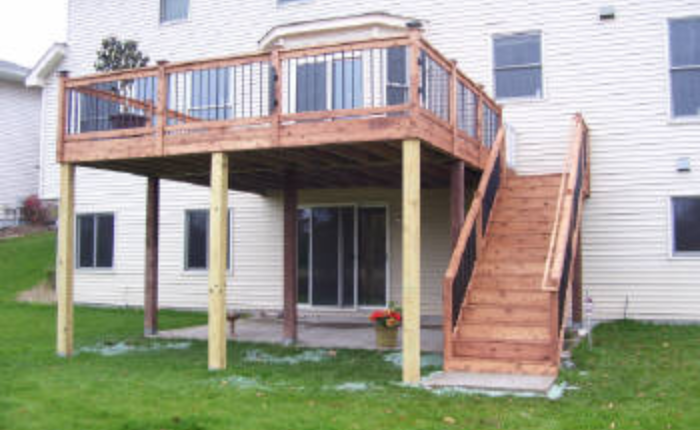 Thinking about improving your backyard deck, but aren’t quite sure whether you really need to work on it now? It’s possible that old weathered deck will last you through another snow-filled winter, rainy spring, or blistering summer. At a certain point, all the TLC in the world isn’t going to cut it. So how do you know it’s time to replace a deck? We put together some signs to look for when you’re trying to make old deck hold out just a bit longer but in reality, you need a complete deck renovation or replacement.

Your deck is precariously sitting on rotted posts

Newer decks are usually built using concrete footings a couple of inches above the ground and a special bracket to keep the base of the post dry. If your deck is older, there is a good chance the posts rest directly on the footings, which can cause them to soak up water and lead to rotting. This is especially true for posts that are made of wood that is not pressure treated. Posts lose strength as they rot, so eventually they won’t be able to hold the weight of the deck. Having the posts replaced is the safest and best option for your deck.

2. Your railings shake when you grab onto them

While loose railings are not going to cause your deck to fall down and collapse, they are a major safety hazard, especially if you have young children. Whether it’s sooner or later, railing posts that are attached using only nails are guaranteed to come loose. You can try securing deck railings with all of the new nails you want, but it’s not going to solve the problem long term. When we are replacing a backyard deck we always use carriage bolts with washers and nuts to fasten the railing on securely without damaging the wood.

Ledger boards are possibly the most important component of your deck; they hold up the side of the deck that is secured to your house.  A ledger board that isn’t properly fastened or is deteriorating can lead to probably the worst case scenario—your deck completely falling off the house! So, that’s a pretty strong reason to renovate as soon as possible.

To support the deck, your posts should be sitting under the beam or rim joist. Posts that are fastened to the side of the beam or rim joist are putting weight on the fasteners connecting the post to the deck. To ensure a strong connection between the posts and the beam, the deck should be using galvanized carriage bolts. We’ve come across many instances of deck posts being secured only with standard nails, which could easily lead to a deck collapse.

No ledger flashing to keep the water out

You may be asking yourself, “What is ledger flashing?” Basically, it’s what keeps the water from getting between your deck and where it’s attached to your home. It’s essential that the ledger board of your deck is water tight with the house. Even the smallest of water leaks can

lead to mold in the walls of your house, or even worse, the rim joist of the house will rot. If the rim joist rots, your ledger board will fall off and cause the entire deck to topple over. You can easily see if you’re missing flashing by going under your deck and viewing the ledger board. If you see no metal or plastic lip over the top of the ledger board, then it’s something you should consider as part of a backyard deck renovation.

Deck boards that wobble when you walk

If your deck wobbles or gives in when you walk across it and feels like you could fall through at any moment, then this is definitely a good sign that it’s seen better days. Over time, the joists can pull away from the rim joist or ledger they’re attached to and end up twisting their way out of their vertical position, which causes them to become weaker.

There’s structural damage past the point of no return

Structural damage issues are usually a clear indicator that a deck has reached the end of its lifespan. In this case, you’re probably going to need a full replacement rather than just a remodel. If you have rotted wood, you will notice the frame begin to sag. The rot also makes the wood very susceptible to termites, which will eat their way through the wood and create paths that allow water in, accelerating the process of rotting. Once this process begins and the wood becomes even more vulnerable to termites, it starts decaying, and the rot spreads throughout the substructure.  Visible rot on the outer edges of the deck frame and a soft, spongy walking surface are good indicators that your deck has seen the end of its days. You may also notice that screws don’t hold onto the frame members when secured.

Your deck is older than regulations

In Pennsylvania and New Jersey, all decks that measure 30″ above grade level are required to have guards around the perimeter with balusters of 4″ or less to ensure safety. If your deck is in violation of the building code, an update is a must. We use and provide our customers with RDI railings to match PVC or wood on new deck renovations to ensure safety codes are met.

The best way to tell if you have issues with your deck is to have a professional decking company come out and assess it. From there, you can evaluate whether you will be best off with a complete renovation or replacement.

Contact your J3 Renovation and Design to schedule an appointment.

Preparing Your Home Before Vacation

Your email address will not be published. Required fields are marked *

We offer 24/7 Emergency Service to all of our customers. You can always count on AirPro Experts to get to you fast and get the job done right the first time. We use state-of-the-art diagnostic equipment to find the source of your heating and air conditioning problems and fix them fast.
Ut wisi enim ad minim veniam, quis laore nostrud exerci tation ulm hedi corper turet suscipit lobortis

We are a licensed Minnesota building contractor and also carry all required insurances. You can be guaranteed that you are getting a proven, reliable contractor when working with J3 Renovation and Design. You can count on us to get to you fast and get the job done right the first time. Contact us by phone, email address or fill out our form and we will be in touch soon.